From No Man's Sky Wiki
Jump to: navigation, search
The subject of this article is from the Beyond update.
The information from this article is up-to-date as of 27 November, 2019.
This page fills the role of Embassy for a Civilized space community. The information found here represents a user-created civilization that is a creative addition to the game.

The Æther Corps is a civilized space organization.

The Æther Corps is a Mercenary Organization relating to Civilized space communities.

This group of freelance Mercenaries and Bounty Hunters is based out of the Kawarazu IV system which is in the Savenix Instability, a region 200 LY above the PS4 Euclid HUB region The Arm of Vezitinen. 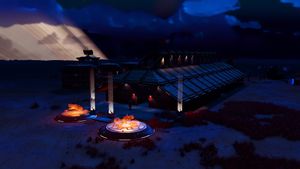 The Golden Longhouse, Main Outpost of the Æther Corps

The Æther Mercenary Corps is a freelance Mercenary Company founded long ago in the heart of the Galactic HUB. They are a clan of elite Space Mercs, Bounty Hunters, and Outlaws from all corners of the Galaxy lead by their Chieftain Kowski42/Spac3Viking.  Their mission is to provide protection and assistance to any citizens of Civilized Space. Their main outpost, the Golden Longhouse, is located near the Galactic HUB but the Æther Corps operates all throughout the known and uncharted parts of the galaxy.

The ÆMC is founded on the principles of survival, combat, and exploration and they enjoy a skirmish in any clime or place. The Æther Corps is also involved in the trading and smuggling of high-class mods, commodities, and products. Their ranks are open to any Warriors, Mercs, Bounty Hunters, crusaders, smugglers, outlaws, pilots, rangers, rogues, or anyone else with enough grit.

To enlist you just have to survive a trip to the Æther Corps' Main Outpost above the HUB or join the Discord. Æther Merc Patrol logs can be found on Reddit NMSAetherMercCorps

Associates of the ÆMC[edit | edit source]

These are some of the organizations that maintain open communications with the Æther Corps and has employed their services.

Life in the Corps[edit | edit source]

Æther Corps Mercs are space-hardened individuals who are no stranger to a fight. During the era of Atlas Rises, in order to join the Æther Corps each interloper was required to travel to the Iron Castle. This either meant endlessly warping through the void in search of Ætherheim or you could portal there and would face a 2hr plus Exocraft ride through frozen forests and across ice canyons. The hundreds of hours played between Kowski42 and the first Æther Mercs theroadwarrio773 and jrjoanes_13 are a testament to what lengths Æther Corps Mercs will go to accomplish their mission. In the age of NEXT the Æther Corps swelled its ranks and established its reputation in the galaxy as a group of Mercenaries that will always get the job done.

If you are interested in joining, message Kowski42 (PS4) or check out the Æther Mercenary Corps on Discord. Once you join, you are an Æther Merc for as long as you choose to be. This means you can join other Æther Mercs as we fight, commission outposts and bases, accept contracts, explore, and post mission logs in the name of the Corps. Mercenary Logs can be found on r/NMSAetherMercCorps.

History of the ÆMC[edit | edit source]

Kowski42 also known as Spac3Viking was among the first interlopers to venture out into the galaxy. He didn’t know if there were others like him at first when he awoke to this strange universe. All he knew was that he must be named Kowski42 because that was the name next to the vital signs on his helmet visor. For ages he scoured desolate and savage planets looking for valuable trinkets and artifacts to fund his lonely exodus toward the only notable beacon in the galaxy, the center. After warping thousands of light years and exploring for countless months he halted his journey when he heard faint radio chatter of a small settlement somewhere off in the galaxy. He immediately shifted course, made use of a black market nav device, and made way towards what travelers were calling the “Galactic HUB”. It took many more months, dozens of warp fuel cells, and more trips through black holes than any mortal should endure before he finally set eyes on the glorious Galactic Hub. In his long months of isolation in deep space Kowski42 had only seen a trace of another traveler once or twice and those trails went cold quickly. In the Hub every star in sight was inhabited or renamed by a traveler, it was then that he knew he had made it to the real center of the galaxy. Shortly after reaching the Hub Kowski42 settled in a small backwater system a few hundred light years from the center and named it after the native name of his trusty fighter that brought him all this way, “Kawarazu”.

Once he reached civilization Kowski42 saw an opportunity. Endless hours spent in deep space in every environment imaginable had given Kowski42 a strong aptitude for survival and a deep understanding of the inner workings of the universe. Kowski42 had been collecting bounties, hunting pirates, and scrapping sentinels since the beginning of his journey long ago. Now that he was in the heart of civilization he decided to become an official Space Mercenary and unite other travelers devoted to selling their skills and firepower, thus the Æther Mercenary Corps was born. The first main outpost of the Æther Corps was the Iron Pyramid located on a vibrant irradiated desert moon Vatel-Pav IV. The outpost was a gigantic pyramid capped with an observatory deck/war-room with a rooftop Landing Pad. The inside of the pyramid was hollow and housed several rooms with any resource or amenity a Merc would want between missions like the barracks, trading terminals, or the NipNip grown in the greenhouse . Many Mercs traveling throughout the HUB stopped and left message pods. There was a multitude of life forms including super predators that ranged in size from traveler to colossus. Unfortunately the cataclysm that began the age of Atlas Rises was not kind to Vatel-Pav IV. The atmosphere was ripped away and with it all the vibrant animals. The planet was left a lifeless husk. A true desert planet now.

The entire HUB was in disarray so there was soon a mass exodus to a distant region of space. Kowski42 followed and found a lawless huburb system in the Sea of Ekastry called Ekastry Prime. The new home planet of the Æther Corps was a snowy Forest planet immediately named Ætherheim. To join the Corps in those days Mercs were required to travel to the Iron Castle, the new HQ. Two legendary Mercs Theroadwarrio773 and Jrjoanes_13 made the long journey to the Iron Castle to secure their places in the ranks of the Æther Corps. This was also a time when many companies and civilizations made their way to the Galactic Hub and there were plenty of business opportunities for the growing organization. Kowski42 frequently visited the HUB farms and amassed a sizable fortune. Also during this time the United Federation of Travelers and the Alliance of Galactic Travellers were formed to unite all the peaceful and cooperative civilizations of the galaxy. Kowski42 chose to keep the Æther Corps sovereign and free from these larger governing bodies mainly so they could work with whoever they please on any side of the law. The Æther  Mercenary Corps answers to no one and its only true mission is to protect the citizens of free space. The Æther Corps welcomes any space mercs, rogues, rangers, or outlaws who can handle themselves . Kowski42 also established a secure communication channel for the clan on a universal comm app known as “Discord”. This is when he claimed the callsign Spac3Viking .

The age of Next brought with it many changes as well as a new wave of travelers and civilizations all across the galaxy. The Galactic Hub was once again relocated and the Æther Corps moved as well. This time the Hub relocated to the The Arm of Vezitinen and the newly established home system Kawarazu IV was only a short warp away. The ranks of the Æther Corps swelled again with many new members in the age of Next. The ÆMC also gained several notable associates in the weeks and months that followed. The Aviszar Cartel employed their services for high profile bounty hunting contracts as well as vip protection. The Brentwood Group became the official law firm of the ÆMC assisting them in foreign relations and legal matters. The ÆMC was contracted to provide military support and organize a fighting force for for the Celestial Kingdoms, a feudal civilization on the fringes of civilized space. By the end of this age Spac3Viking had grown wealthy beyond measure. With a full fleet of frigates, outposts in many systems, and billions of credits in his vaults there is little in the galaxy that could stop Spac3Viking and the Æther Mercenary Corps.