The Æther Corps is an organization relating to Civilized space communities.

The Æther Corps is a group of freelance Mercenaries and Bounty Hunters based out of the Ekastry Prime system which is in the Sea of Ekastry, a region down and to the right of the PS4 Euclid HUB region Shungka Void. 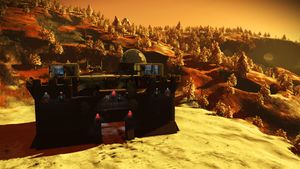 The Iron Castle, current Main Outpost of the Æther Corps

The mission of the Æther Corps is to provide protection and combat services for citizens of Civilized space. This includes, but is not limited to, accepting missions and bounties from various Guilds, players, and player organizations. The Æther Corps will also offer aid against Trolls, Pirates, or other Malevolent players. The Æther Mercenary Corps has pledged to provide any assistance that is required in the defense of the HUB and all Civilized Space against the unknown consequences of NEXT. 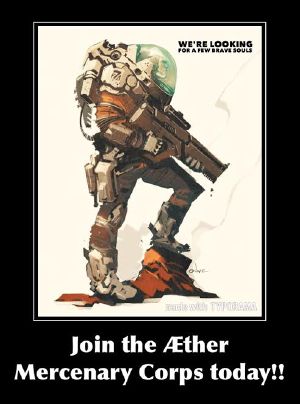 The Corps is looking for any and all capable Interlopers, Bounty Hunters, Pirate Hunters, Scouts, Sentinel Hunters, Space Rogues, Space Rangers, Mercs, Smugglers, Fighter Pilots, or anyone who's been around the galaxy a time or two. To enlist you just have to survive a trip to the Æther Corps' Main Outpost near the HUB (coordinates below) and leave your base coords. Æther Merc Patrol logs can be found on Reddit r/NMSAetherMercCorps

Life in the Corps[edit | edit source]

Æther Corps Mercs are space hardened individuals who are no stranger to a fight. Each and every one has earned their place among our ranks by making the great pilgrimage through the endless Void to our main outpost, the Iron Castle. Once Interlopers reach the Castle and leave a comm pod with the coordinates of their home base or Message Kowski42 (PS4), they are Æther Mercs for as long as they choose to be. This means they can commission outposts, accept contracts, and post mission logs in the name of the Corps. Mercenary Logs can be found on r/NMSAetherMercCorps.