(EPM) Scientific Xplay Diplomatic Center is a player base.

(EPM) Scientific Xplay Diplomatic Center is a player base, located on the planet Oteusio Minor in the (EPM) GenBra Space Corp Embassy system.

This base is built in the spirit of cross-play with our fellow players who just so happen to be on a different game platform. Constructed in the main region of the Xbox group Empire of Phantomium Marxium, maintained by the PS4 company GenBra Space Corp. 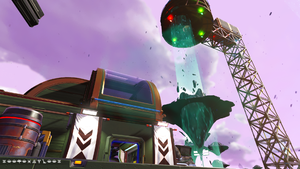 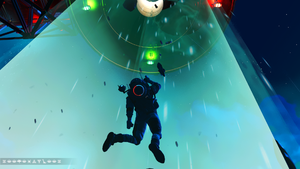 Scientific Jump into the ether 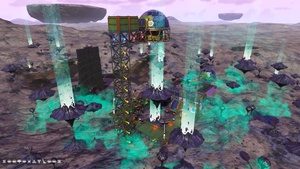 Day view of base structure

Imagining a world of cross-play where PC, PS4, and Xbox players can unite in one star system together. This base tries to construct a bridge between our platforms; even if this is impossible. I imagine the light fissures as portals to a new world, a united dimension... When you jump into the light where do you go?

Built as a science based structure with an erected crane-like dome that houses experimental NipNip which is grown in this planet's mysterious pillars of light. The side effects of this Nip is unknown and only the bravest should try.

Basic features are present: Landing Pad, Base Teleport Module, Galactic Trade Terminal, and a couple offices open for conference of personal experimentation. There are two Short-Range Teleporters, one to travel to the upper experimental dome and a second which brings you to the front steps of the local Portal.