(ESS) Agnesota Omega is a planet in No Man's Sky.

(ESS) Agnesota Omega is a planet in the Ubaksaro IV system of the Abikov Anomaly at the Euclid galaxy, on No Man's Sky. Due to a glitch on the discoveries servers, it was renamed to Agnesota Omega by traveller Masticone, but for the sake of our records, the ESS will keep the info of this planet as was found by our scholars.

It is a beautiful ringed Overgrown planet, full of great landscapes, flora, and fauna. The Euclidean Scholar's Society have a shared Living Glass farm on this planet. 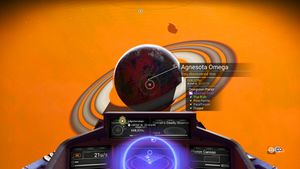 Resources on this planet are labeled as Occasional and most common elements can be found on its minerals and flora. Ground deposits are composed of Paraffinium or Copper and like in every lush-type planet, Star Bramble can be harvested or farmed. Albumen Pearls can be found in its sentient plant form.

Some valuables alien artifacts can be found on this planet and are listed. Dangerous relics are marked in red as taking one of then would automatically grand a 3-star wanted status and becoming target for the Sentinels. 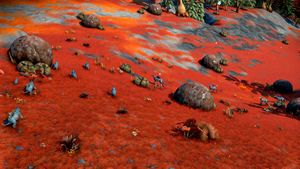 Fauna at (ESS) Agnesota Omega is High. Its lands are populated by several species of herding animals and three predators species. Its skies are soared by huge flying eel-like creatures. On the oceans, two kind of fish can be found. 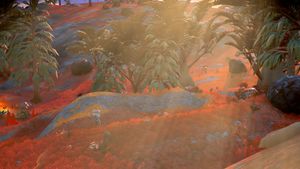 The flora of this planet is classified as High. Being an Overgrown planet it is full of every kind of flora which makes its landscapes very beautiful. Most of its terrain is covered in red grass, and flower plants and bushes are frequent. Trees are tall and varied. The seabed is covered in red seaweeds and several kinds of plants can be found, such like cymodocee and tentacled anemone.

On lakes, oceans and underwater caves, Candle Kelp can be found and it have two primary uses: to harvest Kelp Sac and to refill the Oxygen Tanks of the Exosuit while underwater.

Star Bramble can be found or grown on this biome, and its byproduct Star Bulb can be used in crafting several products.

Other existing rare plants that yields valuable resources can also be found: Sac Venom and Albumen Pearl. Be aware that taking this endangered resources can alert the sentinels on the planet, and automatically grant a 3-star wanted status and becoming a target to be attacked on sight. 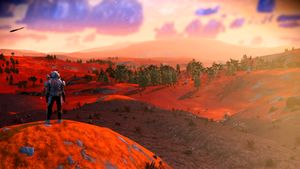 Topologically (ESS) Agnesota Omega is divided in two main features: one large continent and one big ocean with sporadic islands.

The continental land is composed mainly of long prairies, but also features mountain ranges and deep canyons with enormous caves.

The oceanic side of the planet features ample water masses with sporadic islands of several sizes. The ocean is somewhat shallow, but it have very deep underwater tunnels.

This planet has two kind of cave systems. On its continental land it has enormous caves that that can be big enough to allow a starship to fly inside them. Some hazardous flora that produces toxic gas clouds can be found there, so precautions must be taken. Valuable Vortex Cubes can be harvested safely in its interior. This caves can be connected to underwater tunnels that flow to nearby lakes or rivers. In the oceanic part of the planet, the underwater tunnels can be very long, but thanks to the presence of Candle Kelp the exploration can be a bit safe, as those plants can be used to fill the reserves of oxygen. 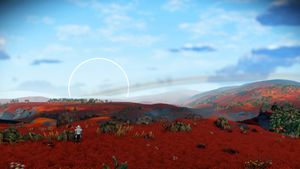 The atmosphere of (ESS) Agnesota Omega is Clear. The weather is Temperate and there is no rains or storms in this planet. Temperatures are nice all the time.

During the day the skies are blue with white clouds. At sunset and dawn it turns orange. At night it get a dark blue color and in some places the orange nebulas of this system can be seen.