(ESS) Chwold is a Frozen Moon of the planet (ESS) Pulompan in the (ESS) Oufimsk star system, located at the Abikov Anomaly region of the Euclid galaxy in the universe of No Man's Sky.

Some places of interest marked with Communications Station: 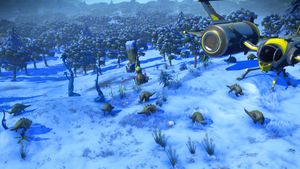 Fauna at (ESS) Chwold is Occasional.

The animal species in this planet are classified as:

From its predatory species, One is aggresive to Travellers and is marked in red on the Discovered Animals list. Caution must be taken.

Two of its flying species are magestic dragon-like creatures of the Cycromys genus.

In this planet also can be found one of the elusive and hard to scan Jellyfish-like creature of the Rhopalocera genus. 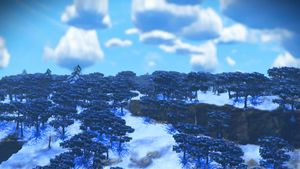 The flora of this planet is classified as Rich.

Being a Sub-zero world with a frozen biome, it resemble lush worlds in the ice ages, having a surface covered by ice, snow and white grass. Trees tend to sprawl quite a lot here so forest are abundant. However, the less the amount of flora, the higher the amount of dead trees. Trees are tall and most have a Blue color.

Frostwort can be found on the wild on this biome, and its byproduct Frost Crystal can be used in the crafting several products. Thanks to this climate, It can also be grown on exteriors, on farming bases.

Another rare plant that can be found on this biome are Mutant Plants. They are appear as mushrooms with floral tentacles which float in the air, and yield Oxygen when farmed using the mining beam.

Sentinel patrolling on this planet is classified as Relaxed. 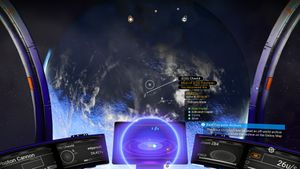 Resources on this planet are Occasional.

As in any Frozen planet the resources Dioxite and Frost Crystal can be found.

Being an extreme weather planet, Travellers can encounter rare and highly valuable clusters of Storm Crystals. These crystalline structures thrive in stormy conditions, and naturally attract lighting strikes, becoming spectacularly luminescent when ionised. It can only be harvested on extreme weather planets during storms. 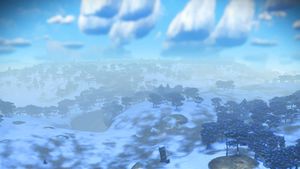 (ESS) Chwold is a Frozen Moon, and its most notorious characteristics are its snow covered soil and dense forests.

Its topological features are a mix of forest of tall trees and clears with scattered pebbles and big rock monoliths.

Underground cave systems on (ESS) Chwold are massive. Its caves are large enough to allow certains areas to be traversed in Exocrafts or Starships. Also, some caves are covered in grass.

No water masses were found on this moon. 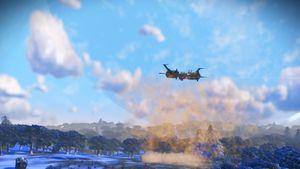 (ESS) Chwold is a extreme Frozen Moon, obscured by heavy snowfall. Supercooled Storms can get really intense, with temperatures plummeting below -140°C (-220°F). Hazard protection is always on due to frigid temperatures. Thermal Protection Upgrade (Cold) modules are strongly recommended.

During the day the skies are Blue with white clouds. At sunset and dawn it turns Pink. At night it gets a Deep blue color and in some places, nebulae can be seen.

This Moon is in the area of operations of the Euclidean Scholar's Society. Our scholars are exploring this entire region and all the gathered info can be found on its main page: Abikov Anomaly.