(ESS) Fonosob-Luylu is a star system in No Man's Sky. 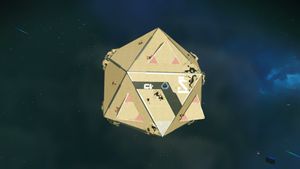 Abandoned Space station at this system.

(ESS) Fonosob-Luylu is a procedurally generated Blue star system in the PC universe of No Man's Sky. It is located at the Abikov Anomaly region of the Euclid galaxy.

This system was once inhabited by the Vy'keen faction, but an unknown event forced them to either leave in a hurry or disappear from existence. Now it is an Abandoned system.

On its heyday times its economy was Mathematical and had a Low Supply wealth. The Conflict Level on its space is now considered as - Data Unavailable -.

Traveller Graves that has been found in this system. A portal Glyph can be learned there. The location has been marked with a Communications Station:

These are the distances (In light years) from this system to the 5 key points inside the Abikov Anomaly. Directions to the Black hole and Atlas Station systems can be obtained from Nada at the Nexus.