(ESS) Liziesb Prime is a moon in No Man's Sky.

It is a toxic moon with sporadic acidic storms. 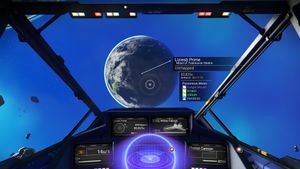 The standard resources that can be found in this moon are:

Albumen Pearls can be found on this moon. However, Travellers have to be careful in harvesting this resource, as taking one of them would grant a 3 star wanted status, and Sentinels will attack immediately.

The Intense toxic atmosphere of this moon doesn't allow the development of animal life. 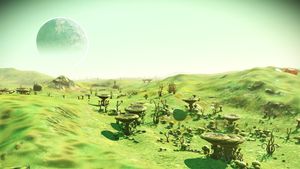 As in most toxic planets and moons, the flora of (ESS) Liziesb Prime is populated by giant mushrooms and fungi type plants.

Fungal Cluster can be found or grown on this biome, and its byproduct Fungal Mould can be used in crafting several products. 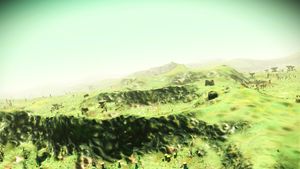 This moon also has long cave systems that can protect the travellers from its toxic climate. 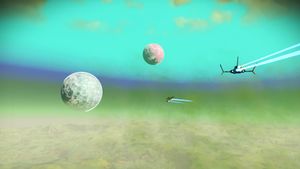 Under a toxic storm

The toxicity levels of (ESS) Liziesb Prime makes the environment somewhat misty. It also produces acid storms several times during the day, when the toxicity levels rises to dangerous conditions depleting the life support systems of the exosuit at an accelerated pace.

The toxic myst of (ESS) Liziesb Prime makes green the predominant color of the environment, in the terrain and in the skies. At night, the skies takes the characteristic dark blue color of this system.