(ESS) Rozhonklika-Ebs is a planet in No Man's Sky.

(ESS) Rozhonklika-Ebs is a planet in the ESS-K-112 Northern Star system of the Abikov Anomaly, on No Man's Sky.

It is an High Energy planet covered in radioactive mist and with Contaminated Puddles. 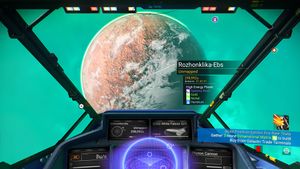 The scan of this planet shows that resources are Rare. However, there is abundance of certain Resource Deposits such as Gold and Nickel. Zinc flowers are aplenty too, which helps with the protection system of the exosuit against the hazardous radiation of this planet, as it is one of the minerals that can be used for its recharge. Plutonium is also in abundance.

As this planet is rich in rock formations, nearly every other mineral can be obtained as a secondary resource in its various kind of rocks. 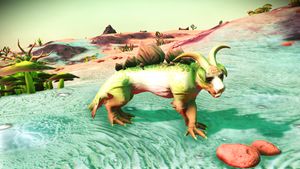 Fauna at (ESS) Rozhonklika-Ebs is Occasional. There are animal species on the ground, air and in the caves. 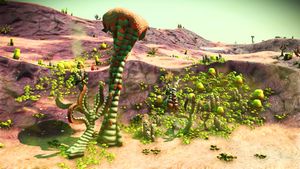 The flora of this planet is Bountiful, so it is full of plants adapted to its radioactive environment. The most abundant kind of plants are the ones with coloured tentacles.

There is also patches of brown coloured grass.

Gamma Weed can be found or grown on this biome, and its byproduct Gamma Root can be used in crafting several valuable products and technologies. 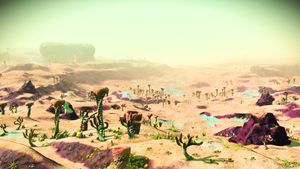 The terrain of (ESS) Rozhonklika-Ebs is somewhat irregular, featuring plains, hills, mountains and pits. It also has strange blue patches of ground in some places of its terrain.

One of its most notorious features are huge spiked rocks.

This planet also has long cave systems that can protect the Travellers from its radioactive climate. 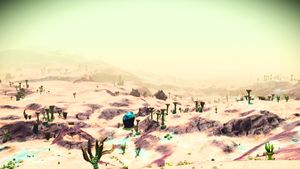 Environment is covered in radioactive mist

The atmosphere of (ESS) Rozhonklika-Ebs is covered in radioactive mist. This condition keeps the radioactive levels high enough to activate the protection systems of the exosuit, which will be depleted at an accelerated pace. Protection against radioactivity es recommended.

During the day, the skies have a light olive color. At night the hue turns dark green and clear enough to allow the sight of the turquoise nebulas of this system.