(ESS) Rukakoi is a star system in No Man's Sky.

(ESS) Rukakoi is a procedurally generated Yellow star system in the PC universe of No Man's Sky. It is located at the Abikov Anomaly region of the Euclid galaxy.

This system is populated by the Vy'keen faction. Its economy is based on Mass Production, and have an Adequate wealth. The Conflict Level on its space is Unthreatening (1). 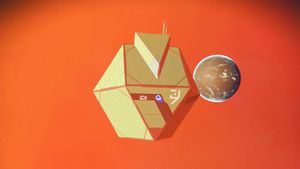