(ESS) Umlaanjeli Jemman is a planet in No Man's Sky.

It is a beautiful and peaceful Lush planet with long plains covered in green grass and with occasional lakes.

It also has an abundance of Nickel deposits. 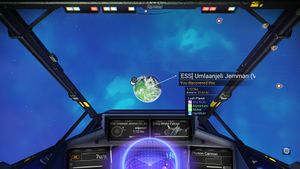 The information about the resources of (ESS) Umlaanjeli Jemman that is shown on a planetary scan says that they are Limited. That is wrong however, as resource deposits of Nickel, Heridium, and Aluminium are abundant. That makes this planet a very lucrative place for those looking to make a fortune in mining.

Vortex Cubes can also be found in this planet, mostly on caves. This resource is dangerous to take because the sentinels that can attack if one of them is taken under its patrolling time, but as the cubes are in the safety of caves, they can be taken without danger.

The only important resources that are scarce are Plutonium that can be found mostly on caves and as a secondary resource on some rocks, and Thamium9.

Sadly, even with the beatiful environment of (ESS) Umlaanjeli Jemman, animal life did not develop, so any kind of fauna is not present. 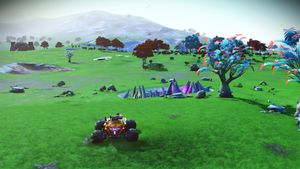 Although the planetary scan shows no flora, being a lush planet, (ESS) Umlaanjeli Jemman has developed a beautiful scenery. The terrain is covered with plenty of green grass and have several types of tall trees.

It also features many flowering plants. Star Bramble can be found or grown in this lush planet, as its Star Bulb fruit can be used in the creation of Poly Fibre.

The lakes are also brimming with several kinds of aquatic flora such as algae and sponges. 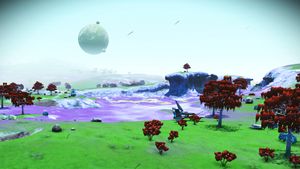 The topological features of (ESS) Umlaanjeli Jemman features mostly plains, with frequent tall rock formations of different appearances. Some of them are like wolf mouths and teeth.

Ground is covered in green grass, and several types of rocks can be found scattered all over the place.

It also presents some mountains and peaks, and several shallow lakes.

There are deep underground cave systems. 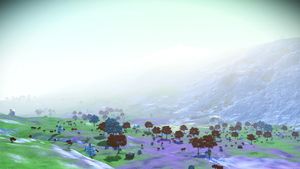 Weather at (ESS) Umlaanjeli Jemman is beautiful. The environment is covered with a thin mist, which makes sight difficult at long distances.

During the day, the skies have a light turquoise hue with white clouds and when the night falls, it takes the characteristic dark blue color of this star system.

(ESS) Umlaanjeli Jemman is full of every kind of waypoints, what make it an excellent place to hunt for multi-tool, blueprint, alien words and many other goodies.