(ESS) Unischel Suhcr is a planet in No Man's Sky.

(ESS) Unischel Suhcr is a planet in the ESS-K-112 Northern Star system of the Abikov Anomaly, on No Man's Sky.

It is a beautiful Paradise planet covered in mist and with occasional hot rainstorms. 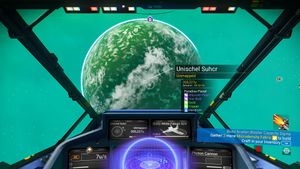 The scan of this planet shows that resources are Average. There is abundance of rich Resource Deposits such as Gold and Copper. Zinc flowers are aplenty too, which helps with the protection system of the exosuit against the occasional hot rainstorms that occur on this planet, as it is one of the minerals that can be used for the recharge of its protection technology. Plutonium is also in abundance.

Albumen Pearls can also be found on this planet. However, Travellers have to be careful in harvesting this resource, as taking one of them would grant a 3 star wanted status, and Sentinels will attack immediately. 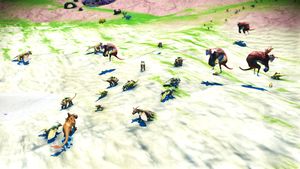 Fauna at (ESS) Unischel Suhcr is Rich. Most unique species is the Sireraeum Noteum, a rare flying creature of the Ungulatis Genus. This planet also have two megafauna species, two flying creatures and three kind of fish-like species. 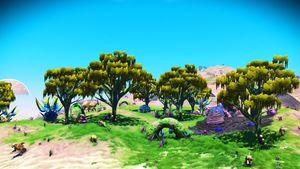 The flora of this planet is High. As in most Paradise planets, (ESS) Unischel Suhcr is like a beautiful garden. Ground is covered in beautiful green grass. Trees are tall and colourful, and flowers are aplenty.

On its lakes, crimson color algae cover the bottom of its waters, and several kind of tentacled sponge-like plants can be found. It also presents weeds of long leaves.

Star Bramble can be found or grown on this biome, and its byproduct Star Bulb can be used in crafting several valuable products and technologies. 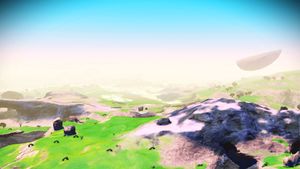 One of its most notorious features are its huge floating plateaus.

This planet also has long cave systems that can protect the Travellers from its stormy climate. 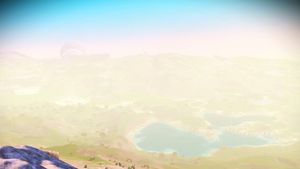 The atmosphere of (ESS) Unischel Suhcr is covered in light mist. Hot rainstorms are occasional and its temperature levels are high enough to activate the protection systems of the exosuit, which will be depleted at an accelerated pace. Protection against high temperature is recommended.

During the day, the sky color is blue. At night the color turns dark green and clear enough to allow the sight of the turquoise nebulas of this system.