(ESS) Unszoongbak is a planet in No Man's Sky.

(ESS) Unszoongbak is a planet in the Adrino-Akhna system of the Abikov Anomaly on No Man's Sky.

This planet has a Tropical Biome of which the more notorious features are constant rain with frequent Boiling Superstorms, desolate, rocky surface and enormous oceans. There is also an extreme fog that covers the planet, and that gets worse when storms occur. 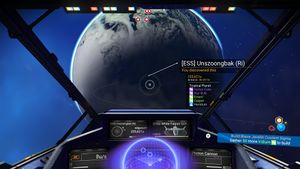 Resources at (ESS) Unszoongbak are Regular.

Vortex Cubes can be found on this planet. However, Travellers have to be careful in harvesting this resource, as taking one of them would grant a 3 star wanted status, and Sentinels will attack immediately.

Other valuable resource that can be found on the oceans of (ESS) Unszoongbak, are the AquaSphere, an extremely valuable curiosity that can be sold for some good money, or used in the creation of several technologies.

Plutonium is very scarce in this planet and it can be found mostly on caves or as a secondary resource on some rocks.

The constant boiling superstorms of (ESS) Unszoongbak makes the development of animal life imposible, so it is devoid of any fauna. 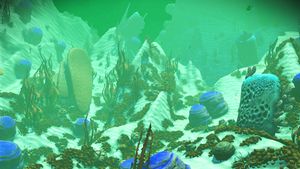 The ground flora at (ESS) Unszoongbak is very limited. Only small plants can develop in its climate.

In the oceans, the flora is more abundant, featuring algae, sponges and seaweed. The Zotoe Legavelae plant can be found there, and its harvested product Kelp Sac can be used for the construction of several products.

Star Bramble can be found or grown on this tropical planet, and its Star Bulb fruit can be used in the creation of Poly Fibre. 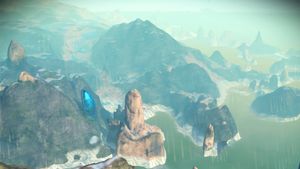 The topological features of (ESS) Unszoongbak include a very rough terrain, full of mountains, peaks and hills.

The oceans are deep and feature several type of rock formations, most of them covered in coral.

There are also deep underground cave systems in the ground and in the oceans. 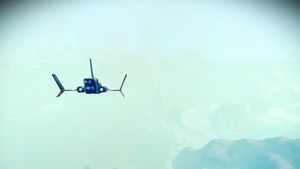 Because of the fog, vision while hovering is nearly imposible

Weather at (ESS) Unszoongbak is very complicated. It presents a constant rain, with frequent boiling superstorms that can reach more that 140ºC. It also has a dense fog that make sight very difficult, even at short distance. When hovering on the starship, vision is nearly impossible. At night, the vision get better as the fog is not very dense.

During the day, the skies have a light turquoise hue with white clouds and when the night falls, it takes the characteristic black sky and blue clouds of this star system.