Doglegsxr - AH is a star system. 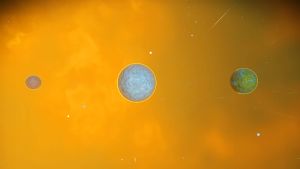 Doglegsxr - AH is a star system in the Ocopadica region of the Euclid galaxy.

The system contains hidden gems, such as the Black Mail Box and lore fragment on -SR375-, Trading station on planet Area 51 and also the fauna and recently discovered new legendary birds of Roswell.

Four-planet system on the lower tree in the region of Ocopadica.

Doglegsxr is the founder of Amino Hub, as he was the discoverer of Amino Prime. This wiki page and survey is a tribute to another system he founded called Doglegsxr - AH.

SpaceArtGek visited the system on 05/28/2017 and dropped off a lore fragment which links to notes about his journey.