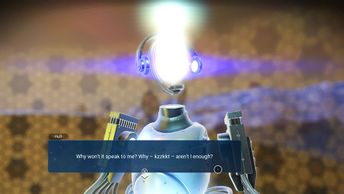 -null- is a Traveller.

-null-, also called Null, is a central character in the main storyline of No Man's Sky. They were introduced in the Atlas Rises update.

-null- was once a Traveller from another universe who defied the Atlas and lived for eternity in order to discover and explore all the star systems and planets of their universe. In response, the Atlas showed them that they were still just another insignificant Traveler in an infinite multiverse, and banned them from that reality, causing them much grief. -null- contacts the player in order to learn more about the faults between realities. They are very cryptic and sorrowful.

-null- appears in several missions of the Artemis Path.

Ghosts in the Machine[edit | edit source]

The player, just before raiding a Korvax Manufacturing Facility, receives a mysterious transmission in space from someone who claims to know much about the player's activity. Once the transmission ends, the stranger is assigned the name -null- by the player's Starship.

The player unintentionally contacts -null- via Holo-Terminus. Null has an existential conversation with the player, then tells them that Artemis can be brought back to life, after a fashion, using a device called a Mind Arc. After -null- gives the player the device's Blueprint, they set the Holo-Terminus to Artemis's frequency so that the player can capture their soul once they have crafted a Mind Arc.

After the player captures Artemis in a Mind Arc, they contact -null- again via Holo-Terminus. After speaking of the foundation of existence, -null- directs the player to space for further help with Artemis.

After the player activates a Portal and speaks with Apollo via Holo-Terminus, the player is contacted once more by -null-, who requests the player's help in figuring out what is happening to The Atlas.

After retrieving the log of a Crashed Freighter, the player shares the results with -null- via Holo-Terminus. Null then asks the player to gather information from the Vy'keen, Korvax and Gek.

The player shares what they learned with -null- over Holo-Terminus.

-null- contacts the player after their ninth Hyperdrive warp for one final conversation, advising the player against heading toward the final Atlas Interface but revealing their selfish motives in the process.