From No Man's Sky Wiki
Jump to: navigation, search
The subject of this article is from the Synthesis update.
The information from this article is is up-to-date as of 18 February, 2020.
This page fills the role of Embassy for a Civilized space community. The information found here represents a user-created civilization that is a creative addition to the game.

Not much is known about the AAAM Expeditionary. The group was formed when three Travellers splintered from the iVc Project after it merged with Alliance of Galactic Travellers.

The group is secretive about their mission, membership and general activity. An AAAM Expeditionary HQ is located one star above the Pilgrim Star at coordinates of:

An AAAM Expeditionary Outpost has been discovered in every galaxy the Alliance of Galactic Travellers have visited, indicating that the group may have a forward operating exploration unit for or independent of the iVc.

These systems are under investigation by the Alliance of Galactic Travellers. Nothing more is known at this time.

The following star systems were discovered by AAAM:

A recently uncovered iVc monitor image shows the AAAM engaged in a massive convoy on the outer edge of the Hilbert Dimension galaxy.

Details are sparse, but the Freighter's emblem indicates that AAA is an abbreviation for Anything, Anywhere, Anytime. The M is a mystery.

Uncovered during a recent embargo inspection, the Alliance of Galactic Travellers found an image file containing the AAAM Expeditionary HQ location. The base of operations is not hidden in the depths of space, but situated one system above the Pilgrim Star. An AGT convoy is currently enroute to the location. 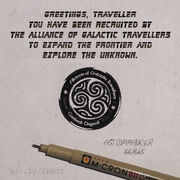 The AAAM manages all recruiting efforts for the Alliance of Galactic Travellers. The two organizations seem to support one another, but not much is known about the relationship.

The AAAM Expeditionary was recently tasked with collecting research material from a monolith in the Calypso galaxy. Research Team Alpha which included five members was assigned to the project but lost communication with its AGT oversight team. Another team was sent to investigate and found the Alpha team hard at work repairing the ruins. The team leader reported that the ruins had communicated to his entire team through telepathic means and they were compelled to obey. Both team leaders submitted a request to the AGT Heritage Council for funds to initiate the Anytime, Anywhere, Anything, Ruins Restoration team or A3-RR. The team would use the latest PS-CC non-invasive technology to halt the further decline of ancient ruins. The AGT Heritage Council hesitantly released the ten team members from their contract and allocated funds to support their effort with the caveat that the ruins be preserved in the name of the AGT Heritage Council as well as the new A3RR.

The motto of the AAAM loosely translates to The universe Has No Boundaries and the group works as a close ally with the Alliance of Galactic Travellers to push the boundaries of known galaxies.