From No Man's Sky Wiki
(Redirected from AGT)
Jump to: navigation, search
This page fills the role of Embassy for the Alliance of Galactic Travellers Civilized space community.
The information found here represents a user-created civilization hub that is a creative addition to the game.

The Alliance of Galactic Travellers is a civilized space community. 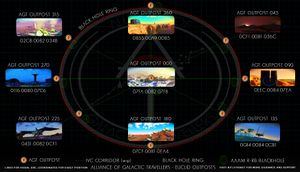 The Alliance of Galactic Travellers or AGT is a Civilized space alliance of Travellers or No Man's Sky players and civilizations of players (PC, PS4 and Xbox) participating in nomadic exploration oriented gameplay within the NMS universe. The group was formed on 8 April 2017 during a discussion in the NMS Facebook Group and has grown from 15 initial members to almost 1900 (as of 3-July-2020).

Players participating in the coalition refer to themselves as Traveller and primarily meet on the AGT Facebook Group and increasingly on Discord.

The AGT is primarily a nomadic group of players who are free to base themselves in any quadrant of any galaxy of their choosing. Traveller members are free to explore, discover and research to their own ends, with a strong emphasis being placed on sharing information and discoveries within the AGT community so as to educate and enlighten the group as a whole.

The AGT have established recognised 'capital regions' in a number of galaxies. AGT travellers are free to base themselves in these regions either permanently or temporarily and to participate and flourish within a community of their peers. However it is noted and acknowledged that only a small percentage of the overall AGT group have made their homes within these regions, with the majority continuing a nomadic existence and basing themselves where their heart desires.

AGT By The Numbers[edit | edit source]

In the wiki, the AGT has the following documented:

Throughout its history the AGT has used many different flags and logos:

The following flag & banner variations have been lodged with the Federation Vexillology Department. These are officially recognised as signifying an AGT outpost/colony and can be used by all AGT Travellers to signify this.

Participating in the AGT[edit | edit source]

The AGT is a founding - and current - member of the United Federation of Travelers and offers support and friendship to all participating civilisations. We are most closely aligned with the Galactic Hub Project. We have partnered closely in the past with the Amino Hub and NMS Café (now Cafe 42).

Historically, the AGT has long-standing and close ties with the partners noted below.