AGT Cel-Tachimo-Emni is a star system in No Man's Sky.

AGT Cel-Tachimo-Emni is a star system in the No Man's Sky universe. This system hosts the regions Atlas Interface.

By PC explorer Celab99 on 16 Dec 2019. It was explored and first documented by CELAB Galactic Industries. 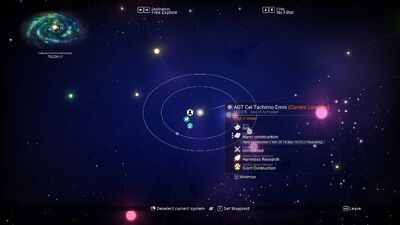 B-21 slot Multi-tool Raycast Irradiator Mark XIV was found at the Space Station during Living Ship era. C-17 Defiance of the Ancients found during Desolation.