AGT Celab Zeta is a star system in No Man's Sky.

AGT Celab Zeta is a star system in the No Man's Sky universe.

It was discovered on 23-Jan-2019 and is the first star system explored after CELAB99 joined the AGT.

It is notable as it is the main system in the Agutissye Quadrant for CELAB Galactic Industries, as it maintains a trading post on one planet.

By PC explorer Celab99 on 23-Jan-2019. It was explored and first documented by CELAB Galactic Industries. 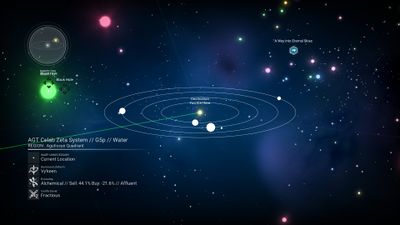 The following items are available at the marketplace in this station: