AGT Firstfall is a star system in No Man's Sky.

AGT Firstfall is a star system in the No Man's Sky universe.

It has significance, as it represents the point of entry into the Yihelli Quadrant by the Alliance of Galactic Travellers. This took place at the end of the Atlas Rises era when the PS4 based AGT were actively seeking to relocate their primary civilised space presence within the Euclid galaxy and had reached agreement with the Galactic Hub Project to migrate the civilisation's capital region to within a convenient distance of that civilisation.

By PS4 explorer zazariins in the last months of the Atlas Rises Era.

A maximum slot fighter "Seiyod's Indiscretion" is available in the system. As AGT Firstfall is a tier 3 economy system, all ships have a chance to present as S class models. 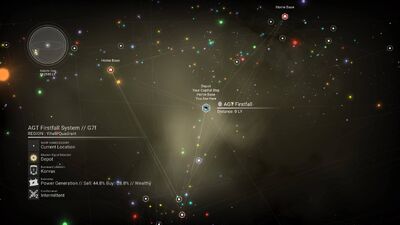 AGT Firstfall is located approximately 3/4 up the trunk which forms the lower part of the Yihelli Quadrant tree.

Hiverfell served as the original capital planet for the Alliance of Galactic Travellers within their capital region, Yihelli Quadrant in the late Atlas Rises era. The Yihelli Quadrant capital moved to AGT Nexus in the NEXT era. A number of AGT members maintain bases on Hiverfell, with Red Force occupying the planet osloweb.