AGT GenBra Party Outpost is a player base.

This base has been deleted and no longer exists.

AGT GenBra Party Outpost is a player base, located on the planet AGT-GenBra Party Planet I in the AGT GenBra Space Corp Outpost system.

This Base is part of GenBra Space Corp. Base located in territory claimed by The Alliance of Galactic Travellers by permission. 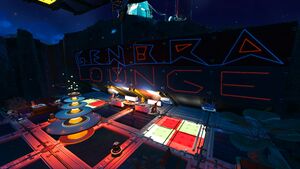 Base is built around an existing Operations Centre that is glitched above & below ground. Upper Level: Dance Floor/Arena & Landing area - Lower level: Lounge