AGT Nazaifus is a star system in No Man's Sky.

AGT Nazaifus is a star system in the No Man's Sky universe. The star system is notable due to planet Cel-Nazaifus I, which is a lush tropical planet that has become well known in the PS4 play world due to its large herds of dinosaur like fauna known as Rangifae, or commonly referred to as diplos. This star system is located approximately 20K light years from AGT Nexus. 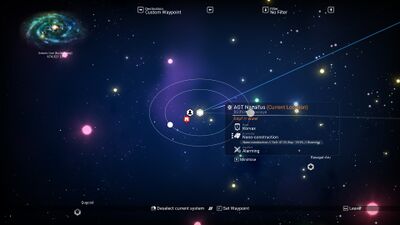 The system is located approximately 20K ly from AGT Nexus.

A Class A, 15 slot Ohmic Polygon Capacitor Multi-tool was found at the Space Station.