AGT Netveri is a star system in No Man's Sky.

AGT Netveri is a star system in the No Man's Sky universe.

It is the designated Artist's System, set up specifically with the intention of giving travelers a central location to build aesthetic and innovative monument/sculpture/installation style bases. The system is freely accessible to any and all interested travelers, not just members of the AGT - and open invitations have been made on numerous social networking platforms and sent to notable individuals and civilizations within the No Man's Sky universe.

By PC explorer Zen Amatin during the Yihelli Colonisation program which took place at the start of the NEXT era. 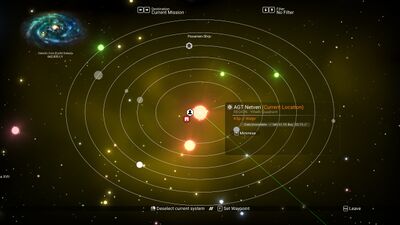 As the designated Artist's System for the No Man's Sky universe, the AGT Fever Cloud System boasts a number of artistic base builds. The initiative has been widely supported by the community as a whole and also civilisations such as the Galactic Hub Project, the Amino Hub and the Top of the Galaxy hub. A selection of these builds are displayed below.