There are multiple versions of the AGT Nexus page, based on game release.

Each AGT Galactic Embassy serves as a NMS Hub and Galactic Data Center for an Alliance of Galactic Travellers research subject classification. The AGT strives to station a minimum of one PC Traveller, one PS4 Traveller and one Xbox Traveller at each Embassy with the mission of using the AGT Naming Convention to discover and name as many if not all of the systems in the embassy's host region.

This star system acts as the capital of AGT in the PC version of the NMS universe. 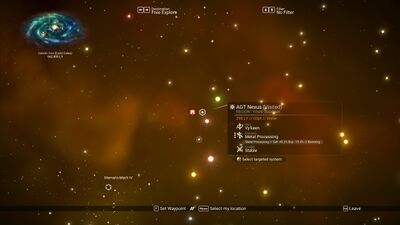 A Class C-18 slot Theoretical Oxide Reflector Multi-tool was found at the space station in the ExoMech release.