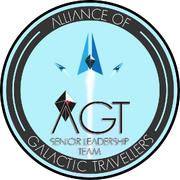 The AGT Senior Leadership Team provides managerial and administrative support for the Alliance of Galactic Travellers and oversees the constituent departments of the AGT.

To serve on the SLT a member must first participate in the AGT Facebook Group and/or the Discord group, in any capacity. The existing Steering Committee will extend an invite based upon merit selection for those exhibiting a sustained long term contribution and active involvement in AGT activities.

There is no limit to service on the SLT and a serving member can only be removed by the AGT Unincorporated Association.

Each member of the SLT receives one vote. All SLT voting matters require the AGT steering committee members to participate.

At least two steering committee members must be present to enact a vote into AGT Lore or to veto a council majority vote.

The AGT SLT Committee serves under the current under the AGT Steering Committee per the DRAFT Constitution Draft 1.1 in effect. Contact AGT-UAC for more information.

SLT members may (but not necessarily always) serve as heads of individual bureaus of the AGT. (See AGT Organization Structure)

The SLT does however oversea all bureaus and appoints leaders to each bureau after consideration of interested applicants and conducting security checks on those applicants.

The bureau heads can be appointed when 3 members of the SLT support a nomination, with no SLT member marking a vote against. If a single vote against is lodged then a majority vote of the SLT is required. Removal of the head of a bureau is accomplished in the same manner as an appointment.