AI ships are a big part of the game. AI ships can be interacted with in many ways, these include: space battles, trading and buying the starship (small ships only).

Cargo ships are ships owned by natural AI Factions, and are similar to Freighters. If attacked and damaged, cargo ships will drop cargo; however watch out as they will fight back and call the Sentinels.

Pirates are AI ships that will attack players or cargo ships at random.

Traders are small ships found flying around and they land on space stations and any structures with a Landing Pad. Players can walk up to a ship and trade with it while it is landed and will have the option to buy the ship at that time.

Sentinels are also in space. They appear when a player receives a Wanted level while in space. 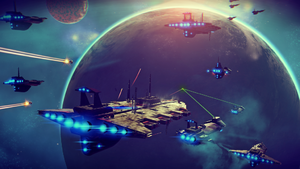 Players can trade with ships by talking with the owner.

Space battles are massive battles players can fight in and join the side of one of the factions.

Players can purchase a small ship by talking to the owner.