Aaberg-Ram was a star system in No Man's Sky during Atlas Rises. During the NEXT update it was replaced by Aaberg-Rac.

Aaberg-Ram was a star system in the No Man's Sky universe. 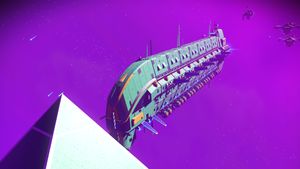 There is a space battle occurring as you warp into this star system. The craft that needs defending is the Hachichiobariyazun – a class A Freighter with 33 slots and a Hyperdrive bonus of +28%. Its purchase price is 390,000,000

The Kaokamog S23 can be found in this system's space station.