Aakit 61/V3 is a planet in the star system HUB1-E4 Proximus I in the No Man's Sky universe. All located in the Budullangr galaxy.

This system is part of the Galactic Hub Budullangr and serves as the Capital Planet.

This planet has no moon 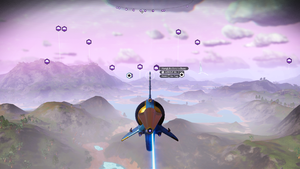 View of the bases on the Capital planet

This planet is the fourth planet in the system.