From No Man's Sky Wiki
(Redirected from Abandoned system)
Jump to: navigation, search
The subject of this article is from the Beyond update.
The information from this article is up-to-date as of 27 November, 2019. 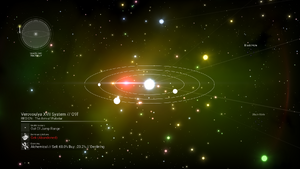 An abandoned system in the Galactic Map.

Abandoned system is a type of star system. 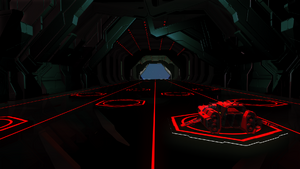 Inside an abandoned Space station.

Abandoned systems were once inhabited by sentient life, but an unknown event forced them to leave. It still has everything any inhabited system has but without NPCs and few or no starships of any kind.

Abandoned systems used to be inhabited by sentient life, but something forced them to either leave in a hurry or disappear from existence.

A heavily damaged Space station is present. It has a still-functioning Galactic Trade Terminal and Teleporter but there is no market. Waypoints like Trading Posts and Transmission Towers are still present and functional, but most of them will be infested by Whispering Eggs and Biological Horrors. Buried Technology Modules and item crates can still be found in planets and moons.

It is not completely abandoned though. Pirates can still attack you if you stay in space long enough. Space battles can still occur if you warp here at certain times.

Where to find[edit | edit source]

Abandoned systems will only show up as (abandoned) once you visit them, otherwise they will look like ordinary systems in the Galactic Map.

With a Conflict Scanner and Economy Scanner installed, they will always have a low economy rating and no conflict rating. Switching to the conflict filter may reveal that there is still conflict, though it will always be low.