Adrinovori is a star system. 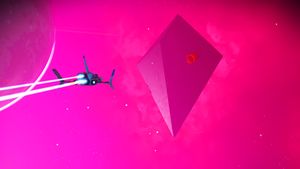 Adrinovori is a procedurally generated Yellow star system in the PC universe of No Man's Sky.

It is located at the Abikovaco Adjunct in the Euclid galaxy, and in the main area of operation of the Euclidean Scholar's Society.

It is also one of the cardinal points chosen by the Euclidean Scholar's Society as a location reference inside the Abikovaco Adjunct.

Those who have not completed the Atlas Path will see an Atlas Interface in this system.

These are the notable starred items on the Space station vendors:

The Technology Merchant at the Space station has these Blueprints for sale:

The Adrinovori is populated by the race of electronic lifeforms, the Korvax.

These are the some of the Freighters spawning in this system.