Adventures in No Man's Sky

Adventures in No Man's Sky is a book. 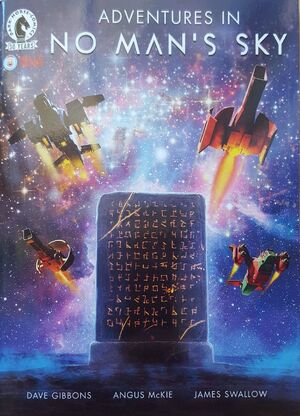 Two Gek traders - a pilot named Helmsman and a Captain whose name isn't mentioned - are transporting a valuable cargo in a hauler ship. The ship gets attacked by a fleet of Vy'keen pirates, who try to steal the cargo. Helmsman tries to flee on an escape pod, but gets shot down by the pirates. The Captain stays on the ship to protect the cargo, and the Vy'keen get attacked by Sentinel ships while trying to board the hauler. The Captain escapes, but their ship is badly damaged. They refuses to jettison the cargo and plots a course to the nearest "Korvax site of antiquity", in an attempt to honor their deal.

They open the cargo hatch, revealing its content: a Korvax in a wheelchair named Entity OC12254. The Korvax had paid the Gek traders to bring them to an Atlas Station, but the Korvax Monolith is the closest location the ship managed to reach. Entity OC12254 asks the Captain to return his shell to his people, "for the generations to come", to which the Captain agrees. The Captain helps Entity OC12254 to reach the monolith, where they can hear the Korvax Echoes, which prophecizes that the Travelers will come and bring hope to the Galaxy. In an improbable moment, a shuttle ship lands near the Monolith. The story ends with the Captain offering money to the unseen pilot in order to rescue them and complete the delivery mission.