From No Man's Sky Wiki
Jump to: navigation, search
The subject of this article is from the Atlas Rises update.
The information from this article is up-to-date as of 23 July, 2018.
This page fills the role of Headquarters for a Company organization. The information found here represents a user-created company that is a creative addition to the game.

Aeon Imperial Enterprises is a corporate entity in No Man's Sky.

Aeon Imperial Enterprises or A.I.E (also informally referred to as Aeon Enterprises) is a private self-funded corporate entity owned by the Solarion Imperium. Its current base of operations is A.I.E-Installation 16.

A Fortune 500 Galactic Company, Aeon Imperial Enterprises is one of the biggest trading giants within the Euclid galaxy with a clientele in the hundreds of millions. Recently Freighter Fuel Corp. merged with A.I.E and traded all its assets over.

The company specializes in crafting advanced alloys like Lemmium and advanced components such as Freighter Fuel and Stasis Devices as well as the infamous Gamma Ray Burst Ordinance superweapon.

Aeon Imperial Enterprises specializes in the manufacture of products of the highest quality and distributes them across the Galaxy to various tech and starship companies.

Note: The items listed below are creations of Aeon Enterprises as their personal products.

Listed below are all Community Farms owned by A.I.E

Listed below are all Multi-tools owned by A.I.E.

Listed below are all starfighters and Freighters owned by A.I.E. 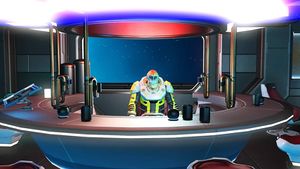 Aeon Imperial Enterprises is one of the leading corporate giants in Euclid. Owned and operated by the Solarion Imperium as an independent corporation, Aeon Enterprises has invested research in Quantum Physics, Prolonged Longevity, Next Generation Energy, Interstellar Weaponry, and the Higher Mysteries of the Universe. The company's employees comprise of all three races, as the company believes in equal-work opportunity for all.

Board of Directors[edit | edit source]

The current CEO of Aeon Imperial Enterprises is the Vy'Keen Akunggu. Akunggu is one of the wealthiest businessmen in Euclid ranking #4 in the Galactic Fortune 100. Through his leadership, Aeon Enterprises has a golden future ahead of it.

Aeon Enterprises main goal is to provide its clientele access to the following;

The history of the company and its roots are shrouded in mystery as the Anunaki oversee the ventures of the business.