From No Man's Sky Wiki
Jump to: navigation, search
The subject of this article is from the Beyond update.
The information from this article is up-to-date as of 27 November, 2019.
This page fills the role of Headquarters for a Company organization. The information found here represents a user-created company that is a creative addition to the game.

Age of eXistence is a company.

Age of eXistence (AoeX) is one of the first organizations formed during the time period known as The Silence of the Sentinels. With the help of the Vy'keen, who formed an alliance with AoeX due to mutual respect for their values and honor, they took in defectors from the Gek Dominion, who did not partake or were against the massive militant expansion of the First Spawn.

With the aid of various races, Anomalies, and Travellers across Euclid galaxy they searched for Korvax refugees affected by the Galactic War waged by the Gek and took them in as well. Through the mutual contribution of all races that are part of AoeX they strive to expand their reach into the stars for sustainability through exploration of viable systems, an economic and political foothold, and military power if their assets or longevity as a organization are threatened. They have adopted the phrase "aut viam inveniam aut faciam" ("I will either find a way or make one") as their official slogan.

The AoeX was originally founded in the Guidnay Sector region of the Euclid galaxy.

AoeX is the parent organization with the following branches within it:

Below is a series of fictional representations of actual in-game content. 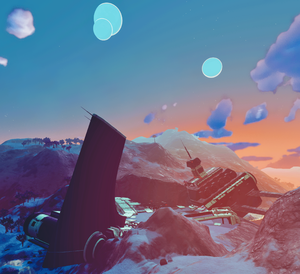 Wreckage of the Trade Freighter SV Emperor Agoyama-Isaw on the planet Ippeneti Minor.

The Trade Freighter SV Emperor Agoyama-Isaw was one of the maiden ships in the early developing AoeX fleet. Stationed in the Ejnerikir System, of the Guidnay Sector of Euclid, the Agoyama-Isaw took part in trade opportunities within the region. After taking on a Korvax refugee and leaving port with their profits they were unexpectedly attacked by an overwhelming force causing the ship to crash onto the surface of the nearby planet Ippeneti Minor.

Several survivors constructed a permanent settlement nearby, due to the pleasant weather of Ippeneti Minor, while others fled to a nearby Trading Post to be extracted back to the headquarters located on the nearby planet AoeX - Guardia.

The ships final log files are located within a Distress Beacon found in the wreckage. The final four logs read as follows... 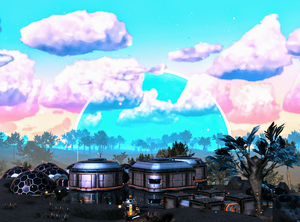 Age of eXistence HQ on the planet AoeX - Guardia.

Company headquarters are located on the planet AoeX - Guardia in the Ejnerikir system. Base coordinates are below.

If you wish to join our company, you should contact the founder Lskall on Xbox.