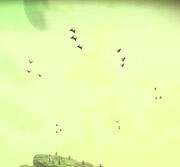 Agnelis is a genus of fauna in No Man's Sky. They are commonly called birds, though some have heads that resemble bats.

They spawn in the air in groups of three individuals but multiple groups can spawn in the same area to build larger flocks.

They have different head, wing and tail types. The feet appear to be always generic bird feet.