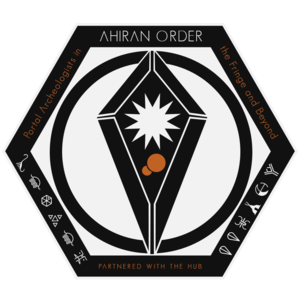 The primary goal of interlopers among the Ahiran Order will be to place an orange beacon at Portal locations, and endeavor to seek out new lifeforms and wonders of planetary geology, documenting these discoveries with pictures and notations that can be shared on the Ahiran Order Discoveries catalogue as well as the Galactic Hub subreddit. Interlopers are encouraged to keep a local log of their discoveries, as well as pictures, all of which can then be shared with other galactic interlopers.

A secondary goal of the Order is to aid other travelers, by placing technology, notes, and other important helpful tips on the worlds they visit. This includes the documentation using exosuit technologies, as well as communicating outside these pathways. Both primary and secondary goals can be catalogued in part here on this page as well.

Each Ahiran Order discovery should be accompanied by a portal address and any information that accompanies their discovery. When traveling to worlds discovered by other interlopers, it is customary to abide by their rules and protocols. For example, when traveling to any new regions occupied by Galactic Hub space, an Ahiran Order member should abide by the Galactic Hub Naming Guidelines. When in the primary regions connected to the Ahiran Order, convention has been to follow our own protocol (see the Ahiran Order main page).

When visiting a new world, it is often useful to build an exocraft near the portal entry point, and spend a healthy amount of time in the field. Take plenty of pictures of the local flora and fauna, if there are any. Take a note of the planet's features, its weather, the existence of caves, oceans, or any other features, the presence of Sentinels, the existence of rare or exotic materials, and any other notes of interest. One might even note the location of the portal relative to other nearby vestiges of civilization, such as crashed ships, alien outposts, Traveller Graves, buried artifacts, or other ancient monoliths.

Specific planets in the Singularity (Black hole) entry systems of the Ahiran Order.

Always begin each entry below with a twelve-digit portal address, and follow with other pertinent information as suggested in the header row.

Beyond the basic location notes that are a part of the above chart of planetary portal addresses and features, a member of the Ahiran Order may wish to log additional information on a planet, and share a picture or two. Add pictures taken on various worlds here, with a portal address and a brief descriptive note. There can be multiple sites of interest for any given planetary body. The goal here is to organize points of interest based on type and portal address, and link that address to the planet notes above.