Akamrat is a planet in No Man's Sky.

Akamrat is a planet in the star system Lulobov on the PS4 version of No Man's Sky universe.

Akamrat came from an ancient language, meaning 'Akam', neighbor and '-rat', a suffix which means something big. So the literally meaning is 'The Big Neighbor'. This name was given by the Bellestan people thousands years ago before their disappearance. 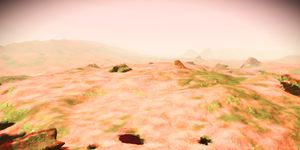 Akamrat is a big lifeless rocky planet. The planet is full of big red rocks with the form of lying hourglasses, which are called heloits. The biggest one can be seen from the space, and received the name of Kamkay Heloit.

There are no waypoints in Akamrat, despite having been thoroughly explored. 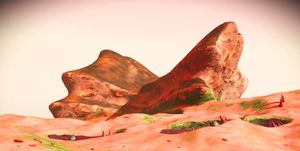 The planet does not have life.

The planet was discovered by the Bellestan people, a civilization which became extinct a thousand years ago. The fact that the resources of the planet can be found in the other planets of the system, in addition to its high temperatures for a Bellestan being (used to live at -40ºC), made Akamrat an useless planet without any interest.