Aluminum is a resource.

Aluminium (Al) is a resource, and a member of the Neutral elements class.

The British spelling of this word is used in the wiki.

A highly desired element in trading markets and cargo manifests throughout the known galaxy.

Can be combined with other elements to create valuable alloys if recipe is available. 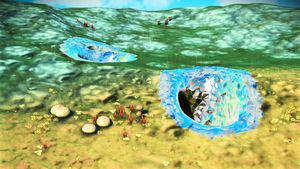 Aluminium can be mined from nodes, crystals, and monoliths on planets as well as asteroids.

Nodes are sub-surface and the cores are hollow. They appear as small vertical caverns, and maintain their white/silvery appearance. Nodes can be located when flying above the surface, as long as you are flying at a low to medium height, and slowly.

Aluminium is used as an ingredient for crafting the following products:

Aluminium is used as an ingredient for crafting the following products:

This element is also called Aluminum in the US English localisation.