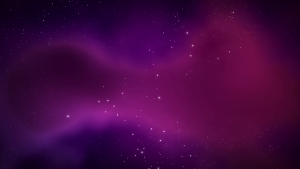 The Amethyst Nebula is a sub-region.

The Amethyst Nebula is a sub-region of the original Galactic Hub, a cloud of interstellar ionized gas wrapped around the lowest quarter of the Nagkamunti Band region, just above the Kihikovant Cluster, on the side nearest the Rentocniijik Expanse.

From a distance (particularly viewed from the "tree" of Rentocniijik) it has the general shape of a barbell, or that of an hourglass on its side. The area of the cloud nearest the galactic center, known as the Rynaalyn Cloud, is rounder and more defined, while the the other end of the nebula, the Burgun Veil, is slightly more diffuse, dissipating into lighter mists that envelope the higher sections of Nagkamunti (where another dark-matter formation can be found). These less-dense areas are not considered part of the nebula proper. The strip that connects the two larger masses is simply known as the Bar. 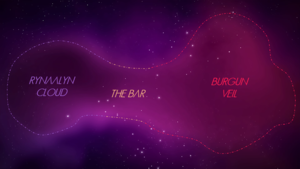 Regions of the Amethyst Nebula

The nebula is mostly empty; only a few star systems can be found within its actual periphery. HUB3-G-C7-Paradise Ocean — the lowest star in the Nagkamunti Band—lies in the lower quarter on the Rento side of the of the Rynallyn Cloud. Mikyushikaha and Zakinohesa (both currently undiscovered) are the two stars deepest in Rynaalyn; near to these two, at the very edge of the nebula on the side opposite from Rento, is the HUB3-G-CC Makonis system. Two stars, IYO and Jisa vertically straddle the Bar between the two clouds and lie just within its boundary. The only star in close proximity to the Burgun Veil is Isomagaeoniw, though it stands just outside its upper edge.