From No Man's Sky Wiki
Jump to: navigation, search
The subject of this article is from the Living Ship update.
The information from this article is is up-to-date as of 6 April, 2020.
This page fills the role of Embassy for the Amino Hub Civilized space community.
The information found here represents a user-created civilization hub that is a creative addition to the game.

The Amino Hub Eissentam is a Civilized space community that was formed by members of the No Man's Sky Amino Hub app that expanded the Amino Hub to the Eissentam galaxy. The capital system of the hub is Aisenn -AH and it's coordinates are here:

Amino Hub Eissentam is now serving as the main location for The Amino Hub. Amino Hub Euclid is now the Legacy Amino Hub.

How to join the Amino Hub[edit | edit source]

The port system of the Amino Hub in Eissentam is Aisenn. The recommended method is to travel to the AH embassy on planet Garak 95/C6 by joining a friend who is already there on the same game mode, platform and hardware. Players can easily locate players for PS4, PC, and XBox on the Amino Hub app. Simply friend the player and join a session and place a base no closer than 1000u from the embassy. Some players also choose to place a base on a nearby planet in the system. From here you'll be able to warp around the Amino Eissentam hub and explore the surrounding areas.

NMS Survival Guru Les Stroud decided he wanted to replicate the original pilgrims trek by walking around the The Pilgrim Star on survival mode with no hud. While accomplishing this feat he managed to get several amino app players and storytellers involved in meeting up at a central location. First arrivals included Boid Gaming on survival mode, and on normal mode Doglegsxr, Saphic701, SpaceArtGek and Andrtacc. In 2019 the hub later expanded to a location in the lush Eissentam galaxy at the Nuponggien Band region. Today both the Euclid and Eissentam branch thrive and are very large NMS Hubs.

Upon reaching the Amino Hub, the first thing you should do is add your information to the Census - Amino Hub Eissentam for the following reasons:

If you need help adding your information to the census please contact someone on the Amino Hub leadership team or ask a question in the general chat of No Man's Sky Amino Hub app.

The Amino Hub naming conventions are simple. Players are encouraged to name systems after aspects of exploration, and add AH to the end of the system name or - AH. It is not recommended to name systems after weather or multi-tools (all that can be catalogued on the wiki anyway) due to potential game resets keeping the system name and changing the planets, as what happened with Atlas Rises. Brackets [AH] are also not recommended as it can make wiki editing difficult. Here are examples of how to properly name an Amino Hub system:

The Amino Hub Eissentam has inhabited the Nuponggien Band and surrounding regions.

Best of the Amino Hub and Content Directory[edit | edit source] 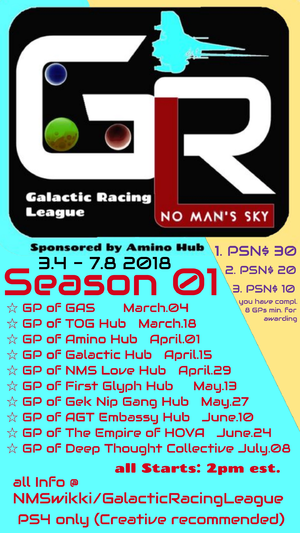 The No Man's Sky Galactic Racing League is a series of solar system races hosted by the Amino Hub that includes 10 racing events from March through July of 2018.

The events were live streamed by individual players and also on the NMS Olympic Twitch channel including collaboration and participation with members of the Intergalactic Coalition of Civilizations.

On April 29, 2017 the four members of the Amino Hub joined together in their first (and the world's first) four-player event called the Amino Hub Games. The event featured participants BoidGaming, Niblet2121, NMS Survival Guru and SpaceArtGek on a 25 minute challenge to see who could scan the most animals. The stream was uploaded to YouTube and was the start of many new Amino Hub multiplayer challenges.

The Amino Hub forms alliances with NMS Hubs such as the Galactic Hub Project, Alliance of Galactic Travellers, and the Spacing Guild. The Amino Hub was one of the four founding civilizations of the United Federation of Travelers. In December 2017 they left and became part of the short-lived Intergalactic Coalition of Civilizations. The Amino Hub has since been thriving for the past year as an independent civilization.

The Amino Hub is proud member of the United Nations 42.