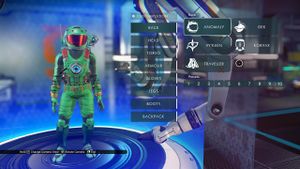 The Anomaly is one of the game's races.

The Anomaly, also known as the Fifth Race, are a sentient species in the No Man's Sky universe. The player can choose for their character to be an individual of this species. It is unknown if they appear outside of player choice as of yet.

All options for the Anomaly character model point to them representing the creators (or humans) from the Atlas questline. The model reflects a typical human shaped body. However, they are the only race that cannot remove their helmet and thus will have to remain a mystery for now.

The father of the Atlas was mentioned in the main story as were the creators of the simulation. It is likely the fifth race represents them (and us).