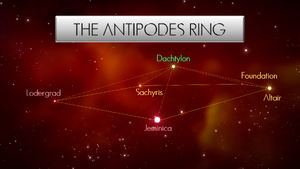 The Antipodes Ring is a sub-region. 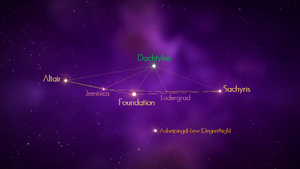 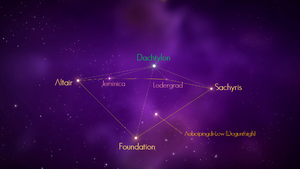 The Antipodes Ring is a sub-region located in the Uugusteur Adjunct. It is a formation of six stars that includes the HUB10-K-5F Foundation system, which is the lowermost star in the entire Galactic Hub.

Five systems make up the ring itself:

The sixth star in the cluster, HUB10-V-1C2 Dachtylon ("finger"), sits above and in the center of the ring, but is still considered a part of the group:

The region as a whole contains 18 planets and 2 moons; in an odd coincidence of placement, each system has either one planet or five, never more or less. A lateral view of the Ring (right) shows Foundation at a slightly lower elevation than Lodergrad and Sachyris, making it the lowermost star in the Galactic Hub (just above the Degunthigh region).

The region was first discovered and explored by Galactic Cartographer UniDestiny on PS4.