Apollo is an NPC character. 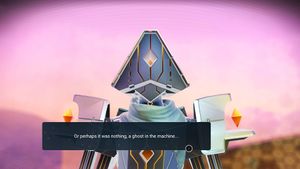 Apollo is a Traveller who the player meets as part of the Artemis Path. Apollo was once a flesh and blood Traveller like the player, but has had their body fully replaced by robotics in some part of their past. They seem to be concerned only with units, and have come to the conclusion that money is the only thing that matters in life.

Apollo appears in several missions of the Artemis Path.

Alone Amidst the Stars[edit | edit source]

The player first learns of the existence of Apollo when Artemis transmits their ID just before disappearing from the Holo-Terminus network.

Ghosts in the Machine[edit | edit source]

The player first contacts Apollo via Holo-Terminus. Apollo is initially uninterested, but the player gains their attention once they are informed of Artemis's misfortune. Eventually, the player decides to work with Apollo to uncover the connection between Portals and the Sentinels.

To this end, Apollo, demanding that the player be sufficiently prepared for the tasks ahead, refers them to several of his contacts to receive upgrades and gain the ability to build a base staffed with an Overseer (NPC) and a Scientist. Once the player has finished preparations, Apollo observes Sentinel activity while the player raids a Korvax Manufacturing Facility.

A Leap in the Dark[edit | edit source]

In light of the data collected during the raid, Apollo contacts the player in space and instructs them to visit two Plaques and a Monolith which will temporarily grant Glyphs to the player so that they can then use the planet's portal.

Once the player has chosen the fate of the soul of Artemis, Apollo contacts the player in space and learns of what happened to their friend.

After activating the portal of a nearby planet and obtaining its address, the player contacts Apollo via Holo-Terminus and must choose whether to transmit the portal's address. If the player does transmit the address, Apollo will enter that address into their portal and attempt to reach the player's planet.

Apollo, if they were given a specific address, contacts the player during their second mission for the Merchants Guild and informs them of their encounter with The Atlas.

Apollo, if they were given a specific address, contacts the player immediately after a Holo-Terminus conversation with -null- and is surprised at being unable to find the player despite being in the same location. The conversation is interrupted by a distress signal before it can progress much further.

Apollo, if they are still alive, contacts the player after their third Hyperdrive warp to give their thoughts on the end of the Atlas and challenge the player to a race to the centre of the Galaxy.

Not to be confused with the Apollo star system.