Aridia is a planet.

Aridia (uh-RIH-dee-uh), the first planet in the HUB3-G-CC Makonis system, is a hot desert world with minimal flora and fauna. It lies 68,572ks from the Makonis space station. 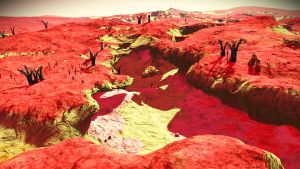 The "scarred" surface of Aridia.

The disfigured surface of Aridia offers little to the enterprising explorer, apart from the Spadonium cacti typical to many desert worlds and a common enough supply of Plutonium, Platinum, and Zinc.

The top strata of red stone is fragile and susceptible to high levels of erosion from the regular heatstorms, making it look as though the planet’s surface is dissolving away to expose the yellow granite underneath. This lends the geography a scarred, pitted look, resulting in frequent overhangs, extensive underground tunnels, and, in some cases, gravitationally suspended formations.

During the daytime, the weather is surprisingly mild, with temperatures rarely rising above -6 °C. Night temperatures are cooler, but only drop to -31.2 °C, temperate enough for most exosuits to handle. Only during the regular heatstorms do temperatures reach nearly 100 °C.

The population of Aridia (who refer to themselves as “Aradians”) isn’t much higher than neighboring Zarenin, and apart from Aridia Station (the planet’s Trading Post), similarly spreads itself out among isolated colonies of small bases and work areas, including Arid Vigil Base and Kotana Tower—both of which contain Transmission Towers that will lead interlopers to nearby abandoned ships (a B-Class Zuwakoji S50 near Arid Vigil, and a C-Class Nameyame S16 shuttle near Kotana).

Aridia does have a Habitable Base on a plateau overlooking a wide plain.