From No Man's Sky Wiki
Jump to: navigation, search
The subject of this article is from the Beyond update.
The information from this article is up-to-date as of 27 November, 2019.
This page fills the role of Embassy for a Civilized Space community. The information found here represents a user-created civilization that is a creative addition to the game. 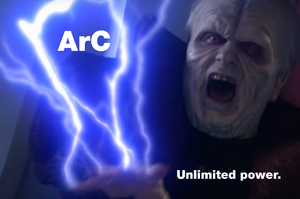 A classic advertisement image of ArC.

Artifices Caeli (ArC) is a civilized space community in the Beta Quadrant of the Euclid galaxy.

"Artifices Caeli" is a Latin phrase which represents the role of a group of World Modifiers (Modders), or "the Craftsmen of Caelus".

From the ancient texts of "War among Stars":

"Did you ever hear the story of the Artifices Caeli? I thought not. It's not a story the Murrites would tell you. It's a Modder legend. The Artifices Caeli are the Craftsmen of Caelus, so powerful and so wise they can use the Cryptic Signs to influence the Atlas to create life… They have such a knowledge of the Multiverse that they can even keep the entities they cared about from The Update. The Craft of the Signs of Atlas is a pathway to many abilities some consider to be unnatural. They became so powerful… the only thing they were afraid of was losing their power, which occasionally, of course, they do. Unfortunately, they taught each other everything they knew, then Caelus took their abilities in their sleep. Ironic. They could save others from The Update, but not themselves."

The words "Artifices Caeli" are representations in themselves:

Caelus (alternative form of Caelum) is also the name of the Roman god of the sky.

Most, if not all, of the meanings of the words can be used as a representation of the Modders' work as: A number of them who create new entities, are in their own sense, artists; as the crafters of the technicalities of the creations, they become craftsmen and masterminds of Caelus;

As a result, the ability of the Modders grow, till they can stand outside the normal meddlings of normal life; they spawn their own resources, they raise their own power, they create life. As they work on, they see the world of Atlas less of a path or a world to conform in, but a canvas which they can change, create and demolish; when the Modders see pass this world of Atlas, they become part of Caelus.

The Creed of the Craftsmen[edit | edit source]

The ArC's motto, "Caelo, Atlas parta", is yet another Latin phrase: "From Caelus, Atlas is born".

Caelus was a substitute for Uranus in Latin versions of the myth of Saturn (Cronus) castrating his heavenly father, from whose severed genitals, cast upon the sea, the goddess Venus (Aphrodite) was born. Which in turn means Caelus is the grandfather of Atlas.

Modders change the world simply by writing Signs and changing numbers, Atlas is manipulable, and the sky is ours - from the Signs we alter, new worlds generate, and we become part of Caelus.

The Compiler Engine grants any willing Traveler a direct interface with the Atlas. In the early known history of the simulation before the First Update, a band of Travelers constructed the Compiler Engine in an attempt to bypass the will of the Atlas and instead impart the will of the Travelers into the simulation. With the Compiler Engine, a user could intercede with the streams of data that made manifest the universe. New instructions could seed anything - modifications could influence something as minor as the performance of various technologies or the quality of substance in certain natural materials - but others could cause greater ramifications such as the birthing of new stars and the destuction of old.

Refer to the Census page for the full list of members. 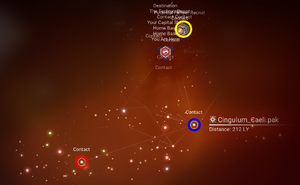 The main region of the ArC is Lofsko Nebula, although their appearances can also be found in different regions.

There is currently no single predominant naming convention in ArC. However, two of the currently proposed conventions are:

Most other details are unimportant, as Modders require no conventional means of income or encounter to survive. There can also be exceptions when a special series of names requires to be put into systems, either for navigation, or the Commune of the DNA of the Soul.