Aspitiusi Fringe is a region.

Aspitiusi Fringe is a region in the Euclid galaxy of No Man's Sky located in the Alpha Quadrant.

The Aspitiusi Fringe is one of the regions that hangs off the top of the Ocopadica flower and contrails stars into a rolling slide/staircase. One star Perea Perch - AH hangs in near empty space overlooking Ocopadica. 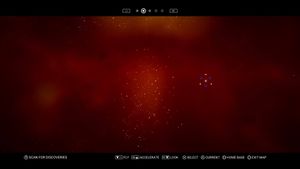 The lone system Perea Perch - AH, a star that is part of the Aspitiusi Fringe hangs in the empty space next to the region of Ocopadica

The following Star systems can be found in the Aspitiusi Fringe:

Connected regions include the following:

This region is near the Amino Hub formed by members of the NMS The Amino Hub app. Players can find this location by following the Pilgrim Star Path to these coordinates: