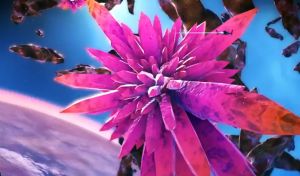 Asteroids are small planetoids that can be mined for resources.

Asteroids are small rocky bodies that orbit a star, and are much smaller than a normal planet. They play an important part in No Man's Sky as they can be mined from your starship for resources.

In No Man's Sky, many planets have rings of captured asteroids in orbit around them. However, asteroids in rings always spawn as rounded 'blobs' and do not drop resources when destroyed.

Here are all asteroid types and resources that can be mined from them: