From No Man's Sky Wiki
(Redirected from Atlas)
Jump to: navigation, search
The subject of this article is from the Synthesis update.
The information from this article is is up-to-date as of 18 February, 2020. 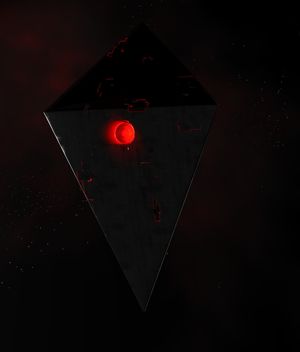 One of the many Atlas Interfaces found in the game

The Atlas is a cosmic entity that plays a central role in the lore of No Man's Sky.

The Atlas is a ubiquitous entity represented by a red orb inside a black diamond. It is the main plot device of the Atlas Path. In some star systems, large Atlas Interfaces can be found. They feature in a similar way to space stations, as players can land their starship inside the interface and then communicate with the Atlas, which takes the form of a gigantic, red, pulsating geometric form.

The Atlas speaks in its own language. They are a god to the universe as well as the artificial intelligence running the universe simulations that the player may live in.

The Interface also contains strange white orbs which disappear when the player walks near; each of them has a chance to reveal a word of the current system’s race.

In the past, the Korvax studied and worshipped the Atlas and the Sentinels. Their devotion to the Atlas remained even after the Great Disconnection, when they were enslaved by the First Spawn Gek to take care of their breeding pools. After several millenia, the Cult of Atlas among the Gek grew stronger due to willful infection of the breeding pools with corrupted nanites by the Korvax slaves. First it affected the edges of the First Spawn Empire, and soon attracted the belief of low spawn Gek subdued by the First Spawn Empire by making them see their insignificance in the universe. The infected and low spawn Gek turned against their leaders and destroyed them. However, as uncovered in the events surrounding the code 16, remnants and loyalists of the First Spawn empire still hide among the Gek.

Today, the majority of Korvax and Gek believe in the Atlas as a god. In contrast most of the Vy'keen are opposed to this doctrine, and see the Atlas as a false god, based on the teachings of their ancient prophet Hirk the Great. The followers of his legendary rival Nal, however, do. They practice their faith in the shadows and plan to expose the lies of Hirk.

In the Artemis Path quest A Leap in the Dark, the Player finds out that the Atlas is actually a computer terminal capable of controlling reality and is assisted by Telamon. Due to circumstances the security program Telamon ended up as the players guide and exosuit AI.

Rogue Data logs reveal the Atlas lore, which can be accessed at Remembrance Terminals.

The words of the Atlas language can be learned by successfully completing Plaque and Monolith puzzles.