The Aviszar Cartel is a Civilized Space Corporation.

The Aviszar Cartel also called La Cosa Nostra is a Civilized space Company focused on Wealth and the distribution of Black Market Sales such as Geknip, Arms Trafficking Fencing and other illicit trades through Price Fixing of provided products. It is considered by many to be a Crime Syndicate and Head of Organized Crime in Euclid as well as the Eissentam galaxy.

The Cartel's main directive is to bring legitimate business to the Galaxy.

The Cartel shares little of its history, knowledge is power and in the wrong hands it can be disastrous. Aviszar was founded by the Godfather who united a group of pirates in the various Underworld Hubs and rose to become a powerful Kingpin in the Crimeworld. The Cartel controls the Intergalactic Syndicate of Organized Crime a powerful interstellar conglomerate of crime families.

The Aviszar Cartel together is called Cosa Nostra (Our Home). Loyalty is everything in the Cartel, proving your worth to our cause will bring you power, wealth, and respect.

The Cartel has four branches with The Godfather and his Consigliere overseeing them all along with the four Underbosses.

The categorical prohibition of cooperation with galactic authorities or reliance on its services, even when one has been victim of a crime. A Made-Men should absolutely avoid interfering in the business of other Made-Men and should not inform the authorities of a crime under any circumstances within the Cartel Ranks. If another Made-Men has wronged another then the two shall settle their feud within the Cartel. Selling Intel on the Cartel to local galactic authorities is prohibited and will not be tolerated. Severe punishment will follow if broken.

The Aviszar Cartel has four main safe houses that act as hubs as well as many smaller asylums scattered throughout the galaxy. 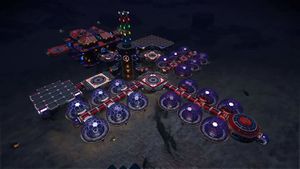 Asylums act as smaller hideouts for the Cartel ranging from military facilities to research and medical outposts.

The Aviszar Cartel runs a well formed network of activities throughout the galaxy.

Listed below are official subsidiaries of the Aviszar Cartel.

Listed below are organizations that contribute assets to the Aviszar Cartel.

The Aviszar Cartel has adopted a simple naming convention:

We have multiple platforms to join our Community:

The Cartel currently has 60 unofficial members within its ranks. Due to security reasons and cartel business, the identity of our members won't be documented to the public such as Gamertags.

The Aviszar Cartel is one of the founding members of the United Nations 42.

The Aviszar Cartel and the Underworld in general have been featured in multiple news outlets.