Aymakutsial is a star system.

Aymakutsial is the smaller of the two Twin Suns binary star pairings and is home to the giant orange and black battle freighter found by PC Permadeath player Alexicek.

It's relatively easy to find due to it being part of a binary pair. It is located halfway up the Ocopadica tree, one star The Twin Suns, and the other Aymakutsial.

This freighter was originally foundy when Alexicek warped to the system and a battle was initiated, although freighter doors would not open.

After PC Permadeath death Alexicek asked for Amino Hub members to help and search for the freighter in his players memory. 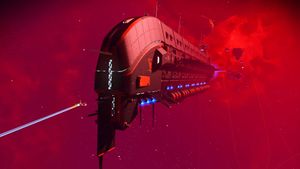 SpaceArtGek located Alexiceks freighter after warping back to the system several times, and finding it in a large scale space battle. Gek battled for the 28 slot freighter and just barely had enough to purchase it for 38 million.