Bagerd-Ubinz is a star system in No Man's Sky.

Bagerd-Ubinz is a star system in the No Man's Sky universe.

This system was explored by GenBra Space Corp.

Located underneath the Core of the galaxy. 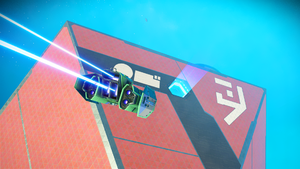 Unprotected Dorornoe Driver is found in the Space station after reloading your game on the one planet in the system.

Overloaded Shock Clarifer Found in the Space station when first entering the System.

Travellers Grave found and marked with a Communications Station: