Batsovokuy is a star system in No Man's Sky.

Batsovokuy is a star system in the No Man's Sky universe. It is notable for having SIX exotic celestial bodies in one system.

The order listed below is the distance to the point of entry. The first is the nearest while the last is the farthest. 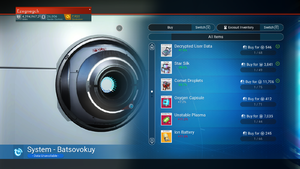 Batsovokuy is a mid-wealth trading economy with low conflict levels.